Everyone’s heard about Amsterdam but how much do you know about the Dutch capital? Perhaps not that much! Here’s our rundown of some of the most frequently asked questions about the city we love to call home!

Amsterdam is the capital and most highly populated city in the Netherlands (a small country situated between Germany and Belgium). The city is situated in the western province of Noord-Holland, one of the twelve provinces of the country. This can be a little confusing – many people mistake Holland and the Netherlands and, although in many languages the two words are interchangeable, Holland is a distinct province (or two provinces technically – North and South Holland) within the Netherlands.

Amsterdam is situated on the River Amstel, from which is gains its name, and the river ends in the city’s centre where it splits into Amsterdam’s famous canals before eventually flowing into the River Ij.

What language is spoken in Amsterdam?

The official language of the Netherlands is Dutch (Nederlands). This west-Germanic language is spoken by around 24 million people as a first-language and 5 million as a second-language. The Netherlands, however, is one of the most multi-lingual countries in Europe and their language skills are a source of great pride to the Dutch people. So, if you’re coming to Amsterdam and don’t speak a word of Dutch, don’t panic – around 90% of people in the Netherlands can speak English. In fact, in Amsterdam, there’s a pretty good chance that you’ll run into someone who speaks your mother tongue – the Dutch capital is home to over 187 nationalities!

What currency is used in Amsterdam? 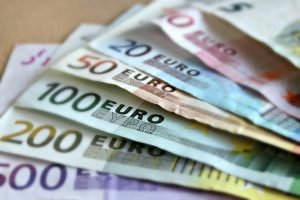 Like most of the EU, the Netherlands uses the Euro. Before 2002, however, the country’s currency was the guilder which had been in use since the 17th century (and even earlier in a slightly different form!). It is worth noting that it can be difficult to use notes above 100 euros in most places in Amsterdam – if you’re getting your Euros in advance, be sure to ask for smaller denominations.

Can you drink tap water in Amsterdam?

Amsterdam has the cleanest tap water in Europe – it’s perfectly safe to drink (despite what unscrupulous restaurant owners will tell you!).

How big is Amsterdam?

The short answer is pretty small compared to most European capitals. Amsterdam’s total area is 219m2 – around seven times smaller than London, or four times smaller than Berlin. Despite its small size, however, Amsterdam is full of things to do. It certainly punches above its weight – this city has more museums and galleries per square kilometre than any other city in the world and with almost a million residents and plenty of visitors, there are a huge number of fantastic bars, clubs and restaurants etc!

How to get around in Amsterdam 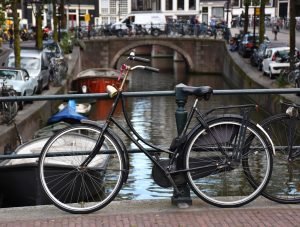 Amsterdam is well-known for the local’s favourite mode of transport – the bicycle! The bike is, without a doubt, the easiest, quickest and most cost-effective way of getting around the city. It’s also great fun, good exercise and a perfect way of seeing the city through the eyes of locals. You can find out more about how to rent a bike by clicking here.

In summary, mixed. The summers can be pretty dry and warm (2019 was really good!) but there can be a lot of rainfall. Spring and autumn are really mixed and the winter tends to be fairly mild but wet. With Amsterdam, you never really know – it’s best to be prepared for every eventuality! If you’re visiting this winter and want some more details about what the weather is like and what to do if it worsens, check out our friends at Starboard Boats’ blog on the subject.