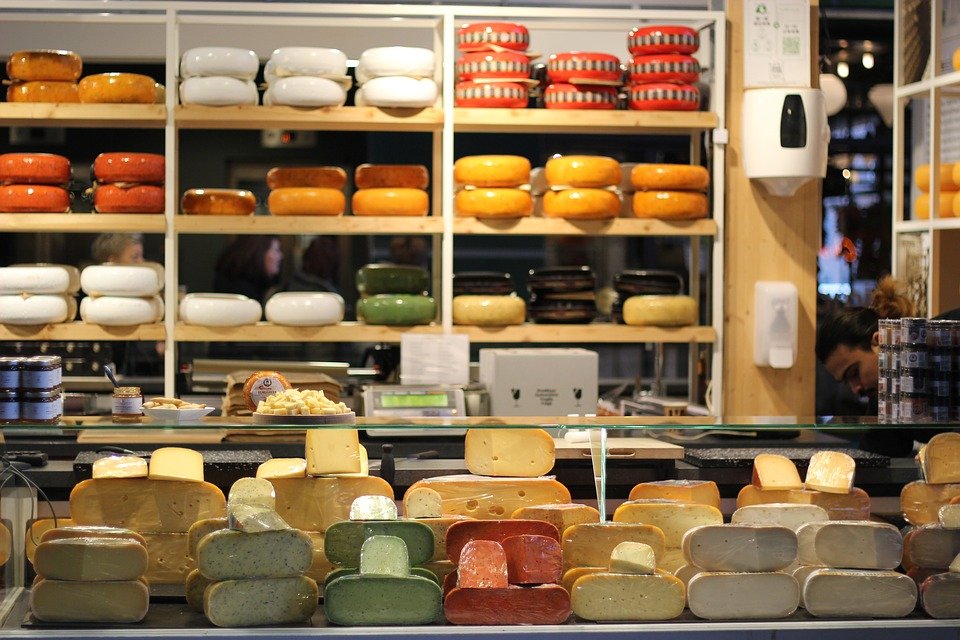 Top 5 Cheeses to try in Amsterdam

Top 5 Cheeses to try in Amsterdam

Say Cheese! 5 Dutch Cheeses you have to try in Amsterdam (and what to drink with them!)

The Netherlands is a fertile country with perfect grazing land for dairy cattle so it comes as no surprise that the country has a reputation as producing some of the world’s best cheese. Cheese is also an important part of the Dutch diet and every day, millions of Dutchies tuck into a Broodje Kaas for lunch. In fact, there’s not a single meal in the day that can’t be improved with some good Dutch cheese, whether it’s with breakfast, lunch or even in cubes with mustard served alongside a couple of beers during the borrell (early evening drinks with snacks!).

Although Dutch cuisine doesn’t have the best reputation, cheese is definitely an exception to the rule and is enough to instantly transform the average Dutchman (whose diet consists largely of hearty, stodgy food) into a food snob. We can’t know exactly for how long the Dutch have been tucking into cheese, but cheese-making equipment dating from 200 B.C. has been uncovered by archaeologists – so they’ve had plenty of time to perfect the art!

From the best restaurants in Amsterdam, local bars and market places, where to find good Dutch cheese…

Cheese can be found pretty much everywhere in the city and, although ‘Amsterdam Cheese shops’ are spread across the centre, these are largely rip-off tourist traps. If you want to take some cheese home with you, avoid these places like the plague and follow your nose to great cheese shops like Kaashuis Tromp, local cheese stalls at markets like the Albert Cuyp Markt, or (for the true cheese enthusiast) to the cheese markets of Edam, Gouda and Alkmere (all just a short journey outside of the city)!

To be honest, it’s pretty difficult to avoid great cheese in Amsterdam – whether you’re enjoying a delicious cheese board after dinner at one of the best restaurants in Amsterdam, or simply having a snack alongside a couple of beers in one of the city’s brown cafes, it’s everywhere! And although Dutch cheese is transported all the way around the world (China, Saudi Arabia and Nigeria are surprising but growing markets!), the best is still found here in the Netherlands. If you love cheese as much as we do, and are planning a trip to Amsterdam, you’ll be delighted to hear that there are loads of top quality, delicious cheeses to try – here are our favourite 5 Dutch cheeses and the best drinks to enjoy with them…

Gouda is by far the most popular cheese in the Netherlands, and although this cheese can be found in supermarkets around the world, the real stuff is to be enjoyed here. Whether it’s cut up in cubes and served with mustard as a bar snack, or stuffed into a sandwich for breakfast or lunch, Gouda is the go-to cheese for every occasion! Although it’s probably most commonly paired with Heineken during after-work drinks across the city every evening, Gouda goes equally well with Cabernet Sauvignon.

Geitenkaas is a Dutch cheese made from Goat’s milk. Geitenkaas is known for its mild flavour and creamy texture and is best enjoyed with a glass of sherry! Although this might seem a bit unusual, it’s a great pairing and well worth a try for the goat’s cheese lover visiting Amsterdam!

Maasdammer is a semi-hard Dutch cheese which is very similar to Swiss Emmental (with its famous holes). The most famous brand is Leerdammer which can be found cheaply in every supermarket across the city. It’s a really versatile cheese which can be paired well with a variety of white wines and even pale ale!

Nagelkaas (literally meaning ‘nail cheese’) is a pretty special cheese. Although the cheese itself is fairly mild, it is scattered with cloves and cumin, giving a spicy flavour and unique texture. Perfect with a couple of beers, this spicy cheese makes a great bar snack and can be found in more specialist cheese shops across the city.

Edam was the world’s most popular cheese for 400 years (from the 14th – 18th century) due to the fact that, with its famous red wax seal, it does not spoil – it just hardens. This allowed the cheese to travel across the world before refrigeration etc was invented! As a result, there are a variety of Edam-like cheeses across the globe, from Belize to the Czech Republic! Legend has it that in 1847, during a battle between the Uruguayan and Argentine navies, the Urugayan Commodore ran out of ammunition and managed to win the battle by bombarding his opponents with cannon balls!

Although this cheese, or variations of it, are found globally, the original is still the best and can be enjoyed here in its home country, best paired with dry whites or Shiraz for those that prefer red wine.

Amsterdam really is a cheese-lovers haven and whilst the nation’s favourite dairy product can be found in pretty much every restaurant or café in the country, great Dutch cuisine doesn’t stop there. If you want to know more about Dutch food, why not join our Amsterdam Food Tour or check out our blog on the Top 5 Authentic Dutch restaurants in Amsterdam.